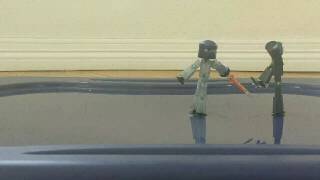 Wind knocked out of me!

Lost in Space by Joshua Nageli

Few years ago, there were three astronauts

in a space shuttle called NASA Explorer 1. Their

names were Jeff, Bob & Mike. They were assigned

to a space walk close to the planet, Mars.

Then, he passed out. When he woke up, Mike had crashed into a Mars Research Facility. The crew of the M.R.F helped him survive the crash. Mike was relieved that he was able to survive but he felt sad for his crew-mates who died.

Mike joined the M.R.F team in their search for life on Mars. He had fun with controlling the Rover robot vehicle, that collects specimens for research. He worked on Mars for two years and then he was sent back to Earth in a space shuttle.